Based on numerous reader emails, I’ve struck a nerve with my last couple articles and I’m glad. Each reply (good or bad) brings up important topics leading to each subsequent article. Today’s is no different…

“Bru, I’m without question the smartest reader on your list so I understood the point of your last message about not taking unsolicited advice. But I’m more than a little concerned about how the masses will interpret that same article. They may feel like you’re telling them nobody needs coaching. (Which I know isn’t what you were saying) If they interpret it that way it will be very counterproductive for them.

Plus it’s counterproductive for you considering the fact that you’re a business coach. You might want to clarify yesterday’s article for everyone.”
– William A. Bush

You bring up a good point. Allow me to clear up any possible misunderstanding of yesterday’s article on ignoring unsolicited advice.

I choose my sources of advice VERY selectively because the parking space in my head is limited. And yours is too so I’d advise you to do the same…

1. Never take advice from anyone you wouldn’t want to switch places with.

2. Don’t let someone who quit on their dreams talk you out of yours.

Because people speak from where they are in life and where they have been. Which is why, in my humble but highly accurate opinion, you need to make sure the people you listen to are where you want to be.

Most of the people who try to talk you out of your dreams are the ones who won’t get off their @$$ and chase their own dreams.

I remember when I first started my career as a speaker, author and coach. There is no salary when you’re an entrepreneur, its 100% commission so to speak as you’re only paid based on your ability to sell yourself and produce results.

There were times when I didn’t make much money. Even though I worked my tail off. A lot of early mornings and late nights. Just as many highs and lows. I’d land a big speaking gig or close a nice consulting deal one day and then there’d be nothing for weeks.

Some of my friends and family would give me unsolicited advice on how they thought I should:

Why don’t you get a “real job”?
You should get a job with normal hours.
Do you have to work evenings?
You’re working hard but there’s no stable weekly income.
Is there really any money in that?

Here’s the thing though…

None of them were entrepreneurs or business owners, none of them ever built a business and none of them had any idea the type of business I was working to build much less what it took to do it.

So explain to me why they would in any way, shape or form be qualified to give me advice on building a business?

This begs the question: Why do so many people with so little expertise feel so confident giving unsolicited advice?

Because of something called the Dunning-Kruger Effect… 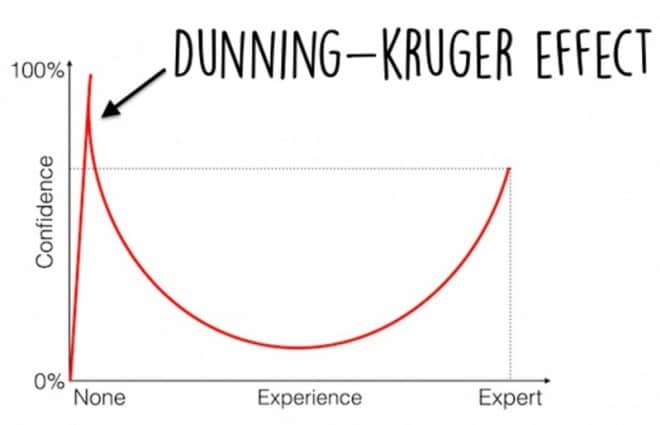 Specifically, the two found that college students who scored as low as the 10th percentile on tests of humor, grammar, and logic, largely overestimated themselves thinking they would score in the 70th percentile. Simply put their actual ability was really poor, but they thought they were in the top third of people.

If that ain’t a reflection of what’s happening in the world of coaching I don’t know what is. A lot of arm chair gooroos believing they have expertise when in reality they have little to none.

In a nutshell that’s precisely why I only take advice from one kind of person:

People who are already where I want to be or at least significantly further down the same road I’m traveling. And have the bumps and bruises to prove they got themselves there.

I’ve been there before and have the battle scars to prove it. My Stadium Status System shows you step-by-step how I built and grew my business along with how others have used the same strategies. Many are probably some of your favorite entertainers, leaders and brands. It also shows you how you can do the same in your life.

That offer is available here for a limited time:

Stadium Status: Taking Your Business to the Big Time

I agree that when I sign up above, I will be added to a mailing list where I will receive DAILY email tips and promotional offers from Coach Bru.

I agree that when I sign up above, I will be added to a mailing list where I will receive DAILY email tips and promotional offers from Coach Bru.
+ +

World Leader In Performance Coaching is Giving Away

I agree that when I sign up above, I will be added to a mailing list where I will receive DAILY email tips and promotional offers from Coach Bru.